Don’t leave me she said

as though reading in my face

the deep pain I hide.

Promise me she said

I need you to stay with me

You are strong enough.

I know it hurts mom

But you can do anything

You can fight this thing.

Promise me she said

promise me you will wake up

you will fight and win.

Promise me each day

you will keep pushing forward

you will grit your teeth.

You will not give up

If tired take the time to rest

promise me you’ll stay with me

you are my best friend.

Find more Haiku’s at Playgroups are no place for children.

In an office far from home,

Makes me miss my babe.

Yesterday I went to an interview for a job I was certain I didn’t want. (It involves representing people being levied by the IRS.) I went for practice, I went to get more comfortable interviewing, I did not go to get a job. Therefore, since I had absolutely nothing invested in the outcome of the interview, I interviewed brilliantly.

My first impressions of the position and the company were horrible. I walked in, in my black suit and heels, hair gleaming in it’s professional coif, to see everyone in jeans, shorts, flip-flops, etc. The receptionist handed me a paper application and asked me to fill it out. I flashed back to high school fast food jobs and nearly walked out of the building right there.

Instead, I sat at a large conference room table and filled out the form. I was aware of the two other potential candidates, both in jeans and flip-flops, and hoped they were applying for a different fucking job. (Attorney’s do not do flip-flops.)

By the time my interviewer came into the room, I was so certain I would never work in this office that I almost told her I was not me, and fled. However, she had a nice smile, and while she was dressed in shorts, a tank top, and flip-flops, she had a very professional demeanor. I remained seated and waited for her to tell me that I would be able to make a fortune there, as they would pay me .50 for every completed magazine subscription.

Then things started to turn the corner. She began our discussion by describing some of the company’s clientele and what is was they did. I listened politely for a while and then proceeded to grill her on the company. Did they represent individuals or businesses? Small businesses or large corporations? Were they primarily local or national? Did the employees dress like this because they never saw clients face to face? What was the atmosphere like? How many attorney’s worked there? Was she an attorney? She and I spent over an hour talking in that room, and I spent as much time interviewing her as she did interviewing me.

It was new for me. Usually I am able to come up with about 10 questions total before I am too nervous to come up with any more. This time I was a question asking fiend. I didn’t have anything to lose after all, so what was there to be nervous about.

When I left, I realized that I suddenly did care about the interview. I really liked her, and the atmosphere was very relaxed. Even though I have no interest in tax law, and no real desire to work a normal 9-5, I would accept a second interview if it were offered.

I am still not sure if I want to work there, but it seemed a pretty mellow place for an office of 28 lawyers. Of course, they will have to be okay with me forgoing flip-flops, but I would be thrilled to be able to wear my Chaco’s to work every day.

I came home from the interview worn out. I spent the rest of the night lying down on the couch and nursing the baby. I had forgotten how taxing it is to be “on” for that long, even when your not invested in the outcome of your performance.

See what I say in brief.

Down the Rabbit hole… 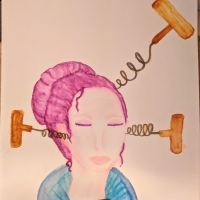 A blog by Dr. Abhinav Majumder

A blog about chronic illness and chronic pain life

The answers to the universe...and other twisted news.

Written from the heart, this is the unadulterated truth of life with multiple chronic illnesses and being housebound. My life open for you to follow. Please join me

A positive approach to a journey through chronic illness

Must Be This Tall To Ride

I'm a single dad documenting his journey. A guy trying to walk a higher path. And messing up. A lot.

A collective of poems and photos. All photos taken by me unless stated otherwise.

Musings of a crunchy, domestic goddess

Just another mama musing about her kids, Attachment Parenting, activism, photography, and life in general

"Nobody has ever before asked the nuclear family to live all by itself in a box the way we do. With no relatives, no support, we've put it in an impossible situation." - Margaret Mead

Doing my best to find GlutenFree products and support those who live a GlutenFree life through Education, Resources, & Information

Writer in the Garret

A writer living one word at a time